In tourist view of Friuli-Venezia-Giulia the Carnia region is different for its particular architecture, usually wrongly called “minor”. All the valleys and in particular the But one that have its downtown in Paluzza, is formed by buildings links with the real needs of live and work. The simplicity of the constructions you can see also in the structures of the Spread Hotel La Marmote. Even if all restructured with modern techniques, preserve the original simplicity which makes it an intrinsic feature of the territory: wooden balconies, arches, loggias and relief stones.

San Daniele Church
Since 1275 is remembered the “Turris sancti Danielis”, taking part of fortified complex of the Moscarda tower and this suppose that since in that period should existed a church so titled. In fact in 1293 during the feast of the Holy Prophet was granted a three day of market. The oldest building has been many times renovated and finally demolished in 1735, in which took place the current church, consecrated in 1745.

EX San Nicolò Church
It’s documented until 1327. In 1547 was expanded and suspended to the cult in 1849. Given to Paluzza Municipality, the structure was used to LAZZARETO during a smallpox epidemic und finally restructured in 1875; even in this period the bell tower was replaced with the civic tower. From 1905 to 11956 EX Church was used as primary school, until today in which cultural activities are done.

Santa Maria Church
It’s remembered the first time on November 2th 1377 in an ecclesiastical document. From the ancient fifteen century church you can see just the ABSIDE decorated with paintings of Sanvitese Giuseppe Furmio (1555). In the same chapel is preserved the beautiful wooden ANCONA of Antonio of Bergamo (1508-1510) almost entirely decorated with gold. 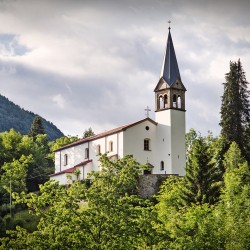 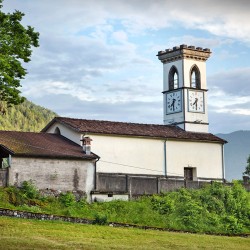 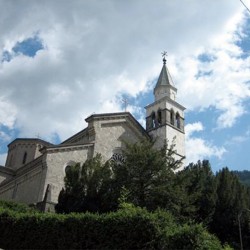