Click: From1992 the Municipality of Paluzza expose in Timau square the monument realized by the sculptor Antonio Tinaglia dedicated to the Carnic Porters and in particular to Maria Plozner Mentil, the one who was killed by an Austrian sniper on February 15th 1916.

This monument would like to remember the Carnic Porters, the women living in the Carnia region (and even form the valley of Alpi Giulie) who used to bring food and war materials to men busy on the alpine front.
A large metal plate on which in bas- relief has been reconstructed a tragic moment of the war, the death of a porter, supported by other two with a basket on the shoulders and a fourth person raise its arms up indicating from which part get the shot.
On July 23 2011 during the 150th anniveray of unification of Italy, this work has been declared a national monument. 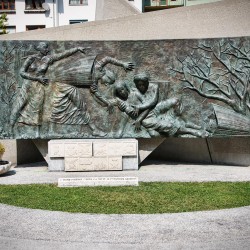